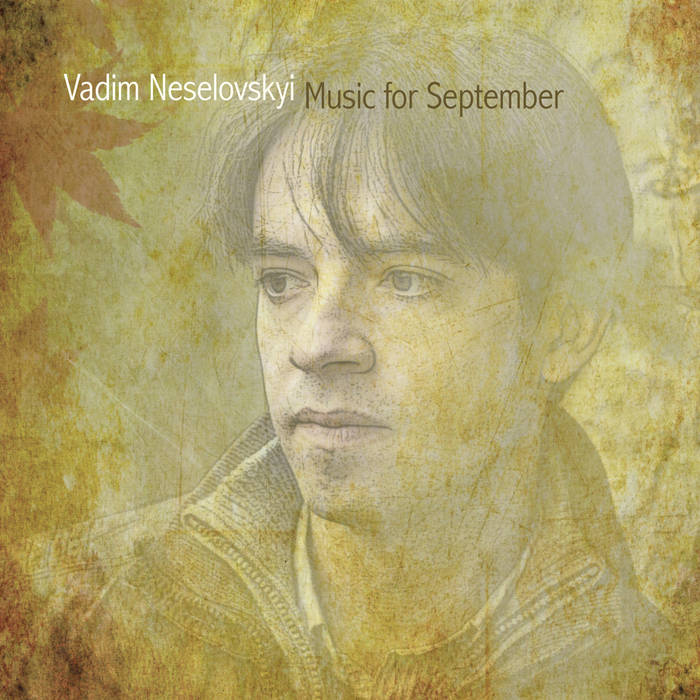 Ukrainian-born pianist Vadim Neselovskyi (pronounced va-DEEM ness-el-OHV-ski) was classically trained at conservatories in his native Odessa and in Germany; honed his jazz chops on German jazz stages and at Berklee College of Music; and undertook his apprenticeship around the world as a member of master vibraphonist Gary Burton’s Next Generation Quintet. Burton has called Neselovskyi “truly a genius,” while the esteemed German music magazine has referred to him as the “Chopin of the jazz piano.”

Neselovskyi draws upon all of those experiences on his debut solo CD, Music for September. An elegant, lyrical collection that is equal parts classical recital and jazz session, the album is a deeply personal expression that evidences the pianist’s unique biography while sounding resolutely fresh and inspired.

“A musician sitting alone on the stage playing piano is a context that’s been around for the last 200 years,” Neselovskyi says. “Liszt did it, Chopin did it, Rachmaninov, Scriabin - I find it very interesting to basically continue that same tradition but to use everything new that the jazz tradition has brought and all the modern musical developments in classical and pop music.”

Despite a wide-ranging repertoire that includes classical pieces by Chopin and Tchaikovsky, jazz and songbook standards by the likes of Freddie Hubbard and Rodgers and Hart, and a few of his own rich originals, Music for September maintains a consistently autumnal mood, redolent of the transition of the seasons, the bold colors of falling leaves, the chill of an early fall morning.

“I went into the studio, closed my eyes and tried to imagine different sides of September,” Neselovskyi explains. “Light rain, sunny walks in the park, all those things. I was trying to channel the lyricism of the early fall and not think too much about notes.”

Of course, it didn’t hurt that the modern master of lyrical pianism, Fred Hersch, was sitting in the booth as producer. Hersch has been a tireless supporter and source of encouragement for Neselovskyi’s artistry over the past several years, so he essentially became the one-man audience for an in-studio performance.

Neselovskyi honed the material on Music for September over several years of performing solo concerts, experiences which proved integral to focusing his approach to the music. A self-professed perfectionist, he recorded every concert and studied each one in minute detail. “Since it’s just me on the stage, it’s very easy to end up playing a lot of notes to fill out the space,” he says. “But one gig after the other, I realized that the best moments I have is when I allow silence to happen. It was interesting to figure out where I could just relax and let time happen instead of trying to fill out time with music. I finally decided I should go into the studio because I was ready to be calm enough to record a solo album.”

Considering himself a composer first, it was natural that Neselovskyi should include some of his own pieces on the album. Both “Spring Song” and “San Felio” originally appeared on his debut, the quintet album Spring Song, and the latter has also been recorded in a classical rendition by Canadian saxophonist Daniel Gauthier, winning an ECHO Classical Award. He saw it as a challenge to approximate a full band sound on the piano. His approach to standards is equally idiosyncratic, as when he plays the head of Freddie Hubbard’s “Birdlike” with his left hand, spotlighting a two-hand independence akin to transposing a Bach two-part invention into a bebop context.

He was more wary about tackling classical pieces, wanting to avoid the pitfalls inherent in melding the two styles. He carefully devised very specific criteria for his own takes on Bach, Chopin, and Tchaikovsky. “When I discovered those pieces,” Neselovskyi says, “I was shocked by how modern the harmonic sequence of those pieces is. They could be pop songs today - if Cristina Aguilera would put lyrics to them, she’d make a lot of money. So I felt that by improvising on those changes I actually could show to the audience how rich those underexplored harmonies are.”

Praised by the Los Angeles Times for his “extraordinary playing” and by the New York Times for his “feathery touch,” Neselovskyi became the youngest student ever accepted into the Odessa Conservatory in his native Ukraine, before moving to Dortmund, Germany with his family at the age of 17. There, he continued to study classical piano while playing jazz clubs by night, eventually earning a full scholarship to the Berklee College of Music.

While at Berklee, he performed and composed for a promotional album produced by guitarist Pat Metheny, and was discovered by Gary Burton, joining a band of future all-stars including Julian Lage, Luques Curtis, and James Williams. Their 2005 CD on Concord, Next Generation, features several of Neselovskyi’s compositions. He has continued to write and arrange for Burton, contributing two pieces to the vibist’s latest album, Common Ground, including, as on Next Generation, the album’s opening track. In his liner notes for Music for September, Burton says that “I don't think I have ever met an improviser who has more surprises in store.”

Neselovskyi has since become a professor of jazz piano at Berklee and currently leads the band Agricultural Dreams, whose strange name echoes those of the Soviet-era independent Russian rock bands that he admires. He also recently recorded a duo project with Arkady Shilkloper, French horn player of the Moscow Art Trio. In 2012 he was awarded the prestigious MacDowell Fellowship, while in 2010 he won the Second Grand Prix at the 5th Martial Solal International Jazz Piano Competition in Paris.

Bandcamp Daily  your guide to the world of Bandcamp